Wizz Air to launch Eight new routes into the Kingdom

The Minister of Tourism and Antiquities, H.E Nayef Hmeidi Al-Fayez, announced during a press conference held on Sunday October 3rd 2021, the conclusion of a new agreement between the Kingdom and the international low-cost airline Wizz Air, during which the airline plans to operate eight new routes into and from the Kingdom.

The inauguration of the agreement came in the presence of the Managing Director of the Jordan Tourism Board, Dr. Abed AlRazzaq Arabiyat, the representative of Wizz Air Group in the press conference, Mr. Owain Jones, and H.E. Eng. Nayef Ahmad Bakheet. The Chairman of ADC Board The Chief of Commissioners of ASEZA Board at the Aqaba Special Economic Zone Authority and a number of media representatives.

The Minister of Tourism and Antiquities, Nayef Hmeidi Al-Fayez said during the press conference: We are pleased to launch the agreement with the international low-cost carrier Wizz Air, confident that the airline will have a great impact on increasing the number of tourists coming into the Kingdom in the upcoming period.

Al-Fayez noted that before the pandemic, low-cost flights coming in and out of the country gave new impetus to Jordanian tourism sector, which enabled the country to achieve a great leap, allowing the Kingdom to win its bet on the sector and seize its share of a highly competitive market in the Middle East region.

Managing Director of the Jordan Tourism Board, Dr. Abed Alrazzaq Arabiyat, affirmed the importance of launching this agreement with the Europe’s fastest growing airline, Wizz Air.

Arabiyat added that this achievement came as a result of the continuous efforts made over the past few years, as it is expected that the Wizz Air operations into the Kingdom will positively affect the tourism sector and also increase the number of tourists, noting that the airline will carry tourists of various European and Middle Eastern nationalities into the Kingdom.

Arabiyat gave a detailed explanation during the conference on the importance of this agreement, indicating that the agreement will include the launch of many marketing campaigns through all the airline's highly established platforms including the website in addition to the different Social Media platforms, Arabiyat also noted that the expected number of tourists entering the Kingdom during the first year of operation will be around 167,000 tourists.

Regarding the entry into force of the agreement, Arabiyat said that the first landing of Wizz Air into the Kingdom is scheduled on the 15th of December 2021.

Speaking at the press conference Owain Jones Chief Supply Chain and Legal Officer of Wizz Air Group said: I am delighted to announce the start of our operations in the Kingdom. I am convinced that the today announced connections will support the ramp up of the tourism industry by offering low fare and high quality flights for passengers. Flying the very latest aircraft technology has always been a cornerstone of WIZZ’s business, with the benefits of lower fuel consumption and lower noise delivering benefits for our customers and the environment. Our brand new aircraft as well as our enhanced protective measures will ensure the best possible sanitary conditions for travellers while operating with the lowest environmental footprint. We look forward to welcoming passengers on board with great service and a smile.”Arabiyat indicated that the eight different destinations will be launched by Wizzair airline, including  four (year-round) routes coming into Amman through the Queen Alia International Airport (QAIA), which are,

Regarding the booking method of seats onboard Wizz Air's flights, Arabiyat added that bookings can  be made  through the company's website (wizzair.com) or its app.

Arabiyat said that The Ministry of Tourism and Antiquities and the Jordan Tourism Board’s main goal is to work on the government’s priority program for 2021-2023 that aims to attract tourists through supporting low-cost airlines in addition to Charter flights.

Arabiyat also indicated that the sector had previously declined due to the restrictions imposed on air travel due to the COVID-19 Pandemic, which resulted in the loss of Millions of Dollars due to the lack of tourists coming into the country, noting that the Kingdom is going through a new stage during which (JTB) seeks to increase the number of tourists entering the Kingdom, in addition to increasing the rate of tourists overnight stay and tourism receipts, hoping to achieve the desired goals set by restoring the numbers achieved pre-pandemic.

Arabiyat also confirmed that the Ministry and the Tourism Board are working on developing, promoting and marketing the Jordanian tourism product in an optimal manner.

Wizz Air, the fastest growing European low-cost airline, operates a fleet of 140 Airbus A320 and A321 aircraft. A team of dedicated aviation professionals delivers superior service and very low fares, making Wizz Air the preferred choice of 10.2 million passengers in the financial year ending 31 March 2021. Wizz Air is listed on the London Stock Exchange under the ticker WIZZ. The company was recently named one of the world's top ten safest airlines by airlineratings.com, the world's only safety and product rating agency, and 2020 Airline of the Year by ATW, the most coveted honour an airline or individual can receive, and a most sustainable company in the airline industry in 2021 by World Finance Magazine. 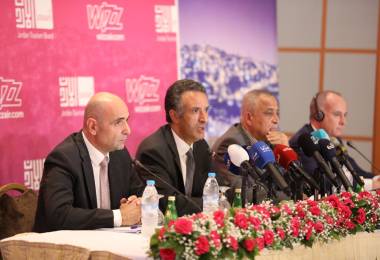