The Kingdom of Jordan is set to regain its spectacular pre-pandemic tourism momentum after the launch of its multifaceted new tourism brand last November.

Jordan is reintroducing itself as an accessible, intriguing and multifaceted destination that appeals to the rising global tribe of intrepid travelers; independent, active, digital-empowered explorers and travelers seeking meaningful experiences and human connection.

Beyond the world wonder of Petra, the Jordanian experience has been getting global attention for award-winning nature spots and adventures like the Jordan Trail; that traverses the Kingdom from north to south offering views of the Jordan Valley and the Dead Sea at the planet’s lowest point. Amman for its urban and town tourism, attracting seekers of authentic flavors to enjoy the mosaic of Arabic culinary delights of the Jordanian kitchen.

In early 2020, the COVID pandemic brought to an abrupt halt what was already a remarkable multi-year acceleration and diversification of Jordanian tourism. With the Kingdom becoming easily accessible through low cost airlines, Jordan was shaking off its traditional “history lesson” positioning, and a new generation of Jordanian tourism innovators was adding exciting new layers of experiences to Jordan’s majestic ancient landscapes. With COVID being an international pandemic affecting us all worldwide, the tourism sector was one of the first sectors to be negatively impacted and most certainly will be the last to recover.

Jordan worked with a great partnership between the public and private sectors in the tourism industry to put together international standard SOPs for all of its tourism sectors, along with being one of the leading countries in the region when it came to the vaccination of the tourism sector, preparing for the recovery process. It has also introduced local incentives to stimulate the economy and programs such as (Istidama – Sustain) that helped secure the tourism sectors employees along with the Jordanian Social Security.

“Jordan is back, delighted to have launched its new tourism brand, as an authentic reflection of a destination which can be considered as a miniature continent when it comes to its diverse landscapes, fuses together a dizzying collage of geological natural and urban diversity, historical richness, a tradition of spirituality and faith, and a contemporary Arabian culture of openness  and warm hospitality that welcomes everyone for leisure, business and healing,” said Nayef Al-Fayez, Jordan’s Minister of Tourism.

If humanity has learned anything from the pandemic, it is a redefined sense of time, making Jordan’s core brand promise as ‘The Kingdom of Time’ even more relevant today: a place where one can literally touch both geological time and human history, where time can accelerate in a bustling city center, slow down during a dive of Aqaba’s Red Sea underwater coral forests, or even come to a total standstill in the deserts of Wadi Rum, under a clear starry sky unveiling the Milky Way.

“Jordan’s new tourism brand that was launched last November along with the new national tourism strategy that was also launched a few weeks ago taps into targeting new age groups of tourists planning their travel, with the new low-cost carrier flights to Jordan from Europe we hope to bounce back faster than we expected. Ryanair has launched new routes to Jordan including a new route that was inaugurated last November from Adolf Suarez Madrid Airport that is key for the Spanish traveler including the current national carrier Royal Jordanian flights, along with Jordan signing new agreements with Wizzair and new routes launched by EasyJet into southern Jordan – Aqaba” said Dr Abdel Razzaq Arabiyat, Managing Director of the Jordan Tourism Board.

Beyond brand building, Jordan’s government and tourism business have worked diligently to ensure the health & safety of citizens and guests. The Kingdom’s successful efforts at preventing a first COVID wave made global headlines in 2020. “Today we are one of the first countries in the region with a fully vaccinated tourism sector” added Al-Fayez.

Jordan will be present at the Fitur 2022 edition with a 232 square meter booth that will showcase a combination of Amman's modern and ancient architecture, and reflect the new brand. The participation of (Turismo de Jordania) will be accompanied by 19 co-exhibitors from Jordan, Royal Jordanian (our national carrier), as well as hoteliers who seek to resume commercial contacts with the Spanish tourism sector that are committed to the destination. 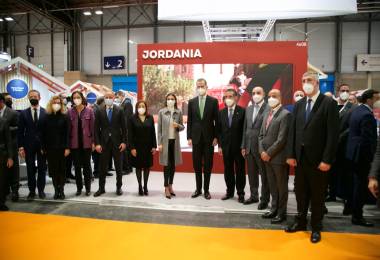