The land of modern day Jordan has been the site of significant events in the history of Christianity, spanning across centuries throughout the New and Old Testaments. It is because of this religious significance that sites all around Jordan have been designated as pilgrimage sites and have been visited by Pope John Paul VI, Pope John Paul II, Pope Benedict XVI and Pope Francis within the past half century. As a land dedicated to religious coexistence, the country of Jordan maintains and protects these religious sites for the use of pilgrims from all around the world. 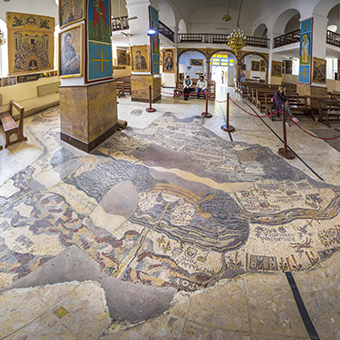 The book of Joshua mentions that Madaba and its neighboring areas were assigned to Jacob’s eldest son with Leah; Reuben: “So their territory was from Aroer, which is on the edge of the Valley of the Arnon (Al-Mujib), and the city that is in the middle of the valley, and all the tableland by Medeba…And the border of the people of Reuben was the Jordan as a boundary. This was the inheritance of the people of Reuben, according to their clans with their cities and villages.” (Joshua 13:16-23).

The Madaba mosaic map located in the Greek Orthodox Church is the oldest picture map of the entirety of the Holy Land that mentions the names of historical cities and rivers. The map is said to have been made during the second half of the sixth century due to its stylistic resemblance to that of the Church of the Apostles. 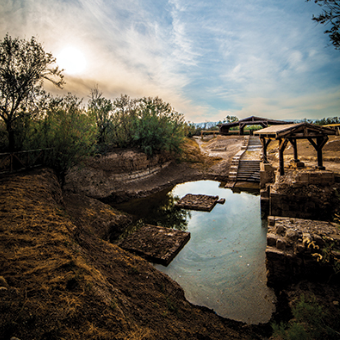 Baptism/ Bethany beyond the Jordan/ Al-Maghtas

The site of John the Baptist's settlement at Bethany Beyond the Jordan, where Jesus was baptized, has long been known from the Bible (John 1:28 and 10:40) and from the Byzantine and medieval texts. The site has now been identified on the east bank of the Jordan River, in the Hashemite Kingdom of Jordan, and is being systematically surveyed, excavated, restored, and prepared to receive pilgrims and visitors. Bethany Beyond the Jordan is located half an hour by car from the Jordanian capital Amman. The Bethany area sites formed part of the early Christian pilgrimage route between Jerusalem, the Jordan River, and Mount Nebo. 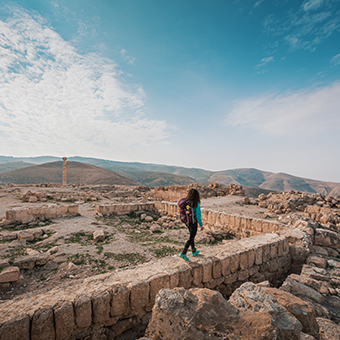 The 1st century AD Roman-Jewish historian Josephus identified the awe-inspiring site of Machaerus (modern-day Mukawir) as the palace-fortress of Herod Antipas, the Roman-appointed regional ruler during the life of Jesus Christ. It was here, at this hilltop fortified palace overlooking the Dead Sea region and the distant hills of Palestine and Israel that Herod imprisoned and beheaded John the Baptist. He was beheaded after Salome’s fateful dance. (Matthew 14:3-11)

On a clear night you can easily make out the lights of Al-Quds (Jerusalem) and Ariha (Jericho). Far removed from the tourist circuit, the quiet of this area transports you back into Biblical times. Indeed, shepherds and their flocks still find shelter in the myriad caves and grottoes around Machaerus. Hike down towards the Dead Sea from Machaerus and you will truly feel that you are on top of the world.

Mount Nebo is most known for being the site where Moses overlooked the Holy Land but did not enter it and where a church and a monastery were built to honor him. The book of Numbers (33:47) mentions that when the children of Israel moved from Almon Diblathaim they camped in the mountains of Abarim, before Nebo, and that the children of Reuben rebuilt the city (Numbers 32:38).

The city remained with the Moabites, according to Isaiah: “Moab will wail over Nebo and over Medeba; on all their heads will be baldness, and every beard cut off” (Isaiah 15:2-3). The Prophet Jeremiah (48:1) said of Nebo, “Thus says the Lord of hosts, the God of Israel: Woe to Nebo! For it is plundered.”

The Prophet Moses “went up from the plains of Moab to the top of Pisgah, which is across from Jericho. And the Lord showed him all the land...” but told him, “you shall not go over there.” (Deuteronomy 34:1-4). “So Moses the servant of the LORD died there in the land of Moab, according to the word of the LORD, and he buried him in the valley in the land of Moab opposite Beth-peor; but no one knows the place of his burial to this day.” (Deuteronomy 34:5-6). 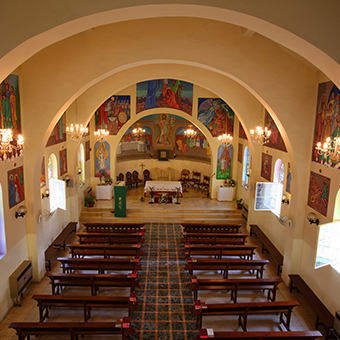 Lady of the mountain

It is believed that Jesus Christ, his disciples, and the Virgin Mary passed through Anjara in the hills of Gilead once and rested in a cave there during a journey between the Sea of Galilee, the Decapolis Cities, Bethany Beyond the Jordan and Jerusalem. The cave in Anjara has long been a holy place for pilgrims and has now been commemorated with a modern shrine, the Church of Our Lady of the Mountain. The cave was also designated by the Catholic Churches of the Middle East as one of the five pilgrimage sites for the year 2000. 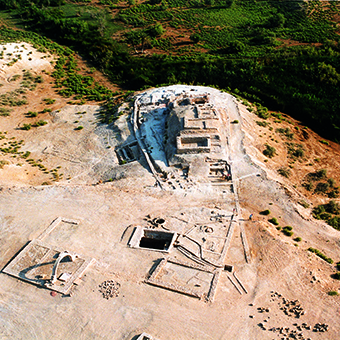 This site has long been identified as the same place from which tradition says Elijah ascended to Heaven. Elijah, one of the most famous prophets sent to the people to bring them back from paganism, lived during the time of the rule of King Ahab in Israel. Ahab and his wife oppressed Elijah, and when Elijah grew old, God inspired him to leave and settle in what is today Jordan. When he and his successor Elisha arrived at the River Jordan, Elijah struck it with his cloak and parted the waters of the river. They crossed the dry land, and as they were speaking together upon the other side of the river, a fiery chariot came and carried Elijah into the heavens (2 Kings 2).