Upon reaching the finish line, Amy said “the furthest of my ambitions as an ultramarathoner, is to market the picturesque aesthetic, terrain and landscape of Jordan through running.”

"This is a great opportunity to highlight the beauty of Jordan and support local and adventure tourism, especially in a year that witnessed exceptional circumstances due to the world's fight against the coronavirus, which led to the cancellation and postponement of many sporting activities and events and difficulties of travelling.

Additionally, I am passionate about sending an explicit invitation to foreign runners, and those who are passionate about jogging in Europe and America, to visit Jordan, and to discover the beauty of its cities and its beautiful aesthetic landscapes,” she added.

The cancellation of Tor des Geants ultra race, a 330 KM endurance trail race that takes place in the Aosta Valley in Italy, and the travel restrictions imposed due to the pandemic, had Amy searching for a solo adventure that she could do locally. After a weekend of running some segments of the Jordan Trail close to Dana, she had her eyes set on discovering the beauty of her new home, by running the entire trail.

The Jordan Trail goes through some of Jordan's most gorgeous scenery traversing diverse landscapes and vistas of the country, from the rolling wooded hills in the north, through the rugged Wadis and cliffs overlooking the Jordan Rift Valley, going through the rose rocks of Petra and the dramatic sands and towering mountains of Wadi Rum, to the crystal waters of the Red Sea. It takes experienced hikers an average of 40 days to cross the 650KM trail.

Amy would spend the next few months planning her grand adventure. In the weeks leading to it, Amy ran several segments of the Jordan Trail, often alone but sometimes accompanied by friends. She kept the trail near and dear to her heart, never running the same segment more than once, leaving a few surprises for the week of the actual event. She chose a window of time between Mid-September and October, as the weather starts to get cooler, maximizing the hours of daylight while minimizing chances of rain and potential flash floods.
While researching the trail, she came across the FKT record that was set by Dan Lawson and Robbie Britton in March of 2019, breaking the previous record 14 days record that was set by British runner Alfie Pearce-Higgins and Jordanian runner Mohammad Al Sweity between 17 November and 1 December of 2017, the first to run the trail in its entirety.

Short for Fastest Known Time, an FKT is the fastest recorded elapsed time between two points. It’s usually recorded on notable or distinct routes that are recognized worldwide and interesting for other runners to repeat. Unlike stage races, FKTs include the time spent eating, sleeping, resting in addition to the time spent running.

Some FKTs are set on courses as short as 5 miles, and as long as 2189, such as the Appalachian Trail in the United States which has an FKT of 41 days, 7 hours, and 39 minutes. FKTs became really popular in the 2000s but some FKTs go back to as early as 1940.

FKTs rose in popularity again this year as athletes started to look for solo adventures they can do on their own instead of canceled races. In fact, according to fastestknowntimes.com, more than 3000 FKTs have been recorded between March and September of 2020, compared to only 700 in 2019.

As it is human nature to explore limits of one’s own abilities, she set out to break their record or at the very least set a women's’ FKT. She reached out to Dan and Robbie to learn about their experience which they happily shared, wishing her good luck on her adventure. In the future, Amy hopes to share her passion and enthusiasm to inspire local athletes, especially women, to take part in big adventures, while promoting the Jordan Trail and the rich history of its attractions.
Takes a Village. The enormity of the trail meant that she could not do this on her own. Amy would work with Mohammed Razem, Co-Founder of Running Amman to help coordinate and plan the attempt. Over the coming days, and with full support from the Jordan Tourism Board led by Ahmad Bani Hani, an experienced Mountaineer and Jordan Tourism Board Adventure Tourism Coordinator, her permanent crew would include:

While she ran a lot of segments on her own, her Running Amman friends rallied to crew, support, and pace throughout the way. The attempt started at 6:09 AM on September 25, 2020 and finished at 3:37 PM on October 3, 2020. It was completed with the support of Jordan Tourism Board, and organized by Running Amman, TREKS, and ASEZA. Amy’s attempt was live tracked by FastestKnownTimes.com using Garmin Inreach. Amy is the first female athlete to run the entirety of the Jordan Trail, she hopes to motivate local athletes, and especially women to take on big adventures and set bold goals, and hopes the new record would inspire other athletes, local and foreign to attempt an adventure on the trail.

Amy Sproston is an American ultramarathoner from Bend, Oregon. She has been a resident of Amman, Jordan since August 2019. Amy is a seasoned ultra runner; consistently ranked as a top finisher at races and international events held across the globe - some as short as 50 kilometers, and others as long as 200 miles. She has won more than 30 ultramarathons around the world over the past 15 years. Her achievements include:

- Won the 2012 IAU 100 km World Championships. She helped win a team title for the United States at the same event.

- Finished second at the 2016 Western States Endurance Run. This was her fourth top- ten finish in the iconic event, the world’s oldest 100-mile trail race. 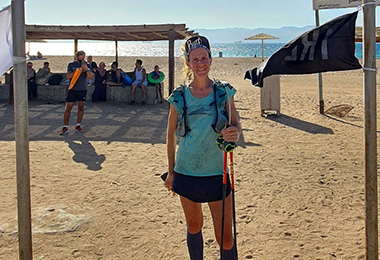