There is no mistaking the fact that Jordan is a Kingdom steeped in history and culture.

From the moment you arrive, you get a sense of its rich heritage; all around are remnants of ancient civilizations long since passed, yet they still remain, stamped into the very fabric of this amazing Kingdom and etched into the soul of the people who live here. 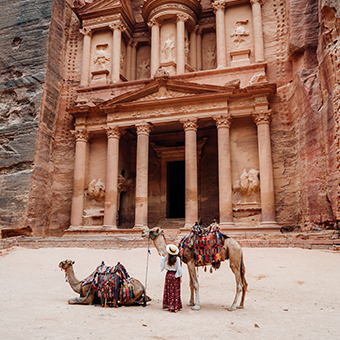 The ancient city of Petra is one of Jordan's national treasures and by far its best known tourist attraction. Located approximately three hours south of Amman, Petra is the legacy of the Nabataeans, an industrious Arab people who settled in southern Jordan more than 2,000 years ago. Admired then for its refined culture, massive architecture and ingenious complex of dams and water channels, Petra is now a UNESCO World Heritage Site that enchants visitors from all corners of the globe. Much of Petra's appeal comes from its spectacular setting deep inside a narrow desert gorge. The site is accessed by walking through a kilometre long chasm (or siq), the walls of which soar 200m upwards. 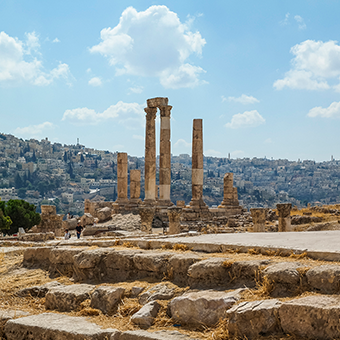 A sprawling city spread over 19 hills, or "jebels," Amman is the modern - as well as the ancient - capital of the Hashemite Kingdom of Jordan. Known as Rabbath-Ammon during the Iron Age and later as Philadelphia, the ancient city that was once part of the Decapolis league, now boasts a population of around 4 million people. Amman, often referred to as the white city due to its low size canvas of stone houses, offers a variety of historical sites. There are a number of renovations and excavations taking place that have revealed remains from the Neolithic period, as well as from the Hellenestic and late Roman to Arab Islamic Ages. The site which is known as the Citadel includes many structures such as the Temple of Hercules, the Umayyad Palace and the Byzantine Church. At the foot of the Citadel lies the 6,000 seat Roman Theatre, which is a deep-sided bowl carved into the hill and is still being used for cultural events. Another newly restored theatre is the 500-seat Odeon that is used for concerts. The three museums found in the area offer a glimpse of history and culture; they are the Jordan Archaeological Museum, The Folklore Museum and the Museum of Popular Traditions. 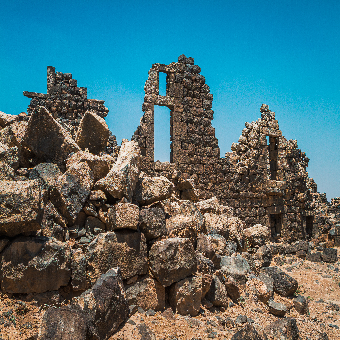 Umm El Jimal is considered an Arabian Oasis for the desert caravans. It is eighty six kilometers away from the capital, Amman, and it is well known as "the Black Oasis", as it contains a large number of black volcanic rocks. History of this city goes back to the Romanian Byzantine Age. 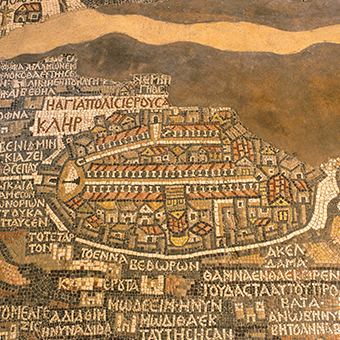 The trip south from Amman along the 5,000-year-old Kings Highway is one of the most memorable journeys in the Holy Land, passing through a string of ancient sites. The first city to encounter is Madaba, "the City of Mosaics." The city, best known for its spectacular Byzantine and Umayyad mosaics, is home to the famous 6th century mosaic map of Jerusalem and the Holy Land. With two million pieces of colored stone, the map depicts hills and valleys, villages and towns as far as the Nile Delta. Other mosaic masterpieces found in the Church of the Virgin and the Apostles and the Archaeological Museum, depict a rampant profusion of flowers and plants, birds and fish, animals and exotic beasts, as well as scenes from mythology and everyday pursuits of hunting, fishing and farming. 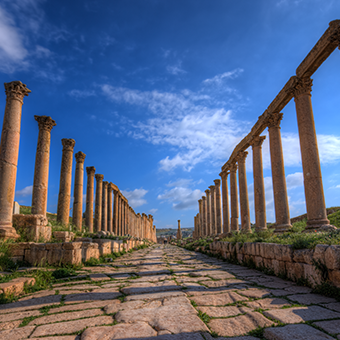 A close second to Petra on the list of favorite destinations in Jordan, the ancient city of Jerash boasts an unbroken chain of human occupation dating back more than 6,500 years. The city's golden age came under Roman rule and the site is now generally acknowledged to be one of the best-preserved Roman provincial towns in the world. Hidden for centuries in sand before being excavated and restored over the past 70 years, Jerash reveals a fine example of the grand, formal provincial Roman urbanism that is found throughout the Middle East, comprising paved and colonnaded streets, soaring hilltop temples, handsome theatres, spacious public squares and plazas, baths, fountains and city walls pierced by towers and gates. Beneath its external Graeco-Roman veneer, Jerash also preserves a subtle blend of east and west. Its architecture, religion and languages reflect a process by which two powerful cultures meshed and coexisted - The Graeco-Roman world of the Mediterranean basin and the ancient traditions of the Arab Orient. 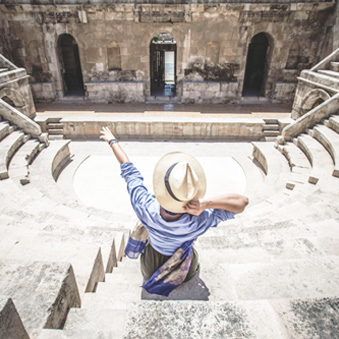 The marvels of nature and the genius of medieval Arab military architecture have given northern Jordan two of the most important ecological and historical attractions in the Middle East: the sprawling pine forests of the Ajlun-Dibbine area, and the towering Ayyubid castle at Ajlun, which helped to defeat the Crusaders eight centuries ago.Ajlun Castle (Qal'at Ar-Rabad) was built by one of Saladin's generals in 1184 AD to control the iron mines of Ajlun, 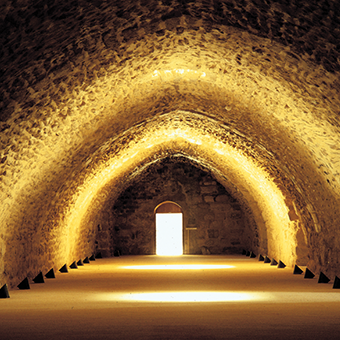 The fort itself is a dark maze of stone-vaulted halls and endless passageways. The best-preserved are underground, and to be reached through a massive door (ask at the ticket office). The castle in itself is more imposing than beautiful, though it is all the more impressive as an example of the Crusaders' architectural military genius. 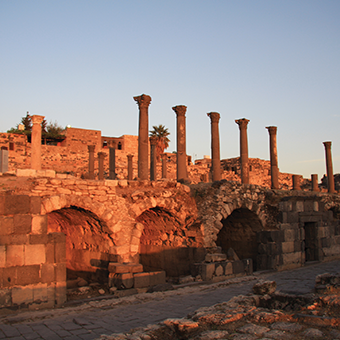 Perched on a splendid hilltop overlooking the Jordan Valley and the Sea of Galilee, Umm Qays boasts impressive ancient remains, such as the stunning black basalt theatre, the basilica and adjacent courtyard strewn with nicely carved black sarcophagi, the colonnaded main street and a side street lined with shops, an underground mausoleum, two baths, a nymphaeum, a city gate and the faint outlines of what was a massive hippodrome.