Madaba is a combination of rural home life and a hot spot for religious tourism. Known as the “City of Mosaics” Madaba is the cultural epicenter for Byzantine and Umayyad mosaics. Just a short distance from the capitol visitors are just a stone's throw away from the holy monuments of religious iconography.

The Bani Hamida Women's Weaving Project, originated by the Save the Children Federation in 1985 and merged into the Jordan River Foundation in 1998, revived traditional Bedouin rug weaving, helping to maintain the social fabric of the Makawir area.

Older women in the community were eager to pass on rug-weaving techniques to younger generations. Today, women in 13 villages keep this tradition alive, while contributing to the betterment of the quality of life of their families.

The rugs were an instant hit when they were commercially introduced and have created a unique image for the Bani Hamida Mountain and its women. As the project grew throughout the years, it has become the largest and most famous rug weaving project in Jordan and the neighboring countries.

Since its inception, the project employed 24 full-time employees, benefited over 1650 wage-based women and over 1.5 million Jordanian Dinars have been paid to spinners, weavers and dyers who have produced the superior quality pure wool rugs that travel the world with a “Handmade With Pride by Bedouin Jordanian Women” ticket.

The impact of the project on these women and their community could be clearly seen in their homes, their health and their children’s education who are now able to earn their university degree. Women have become independent, confident and are socially accepted as working women. 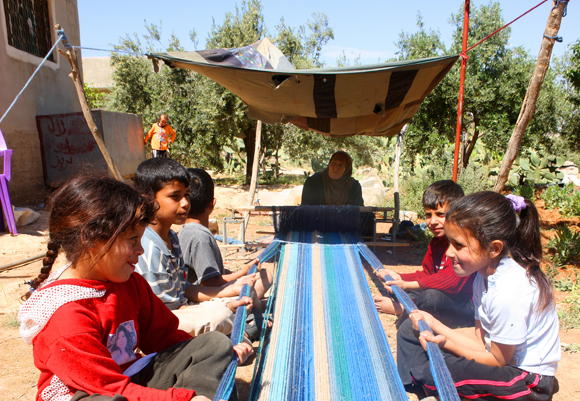